I bought Master of Orion: Conquer the Stars (2016) in a recent deal that included the 3 original games in the franchise started in 1993. After pulling an all-nighter on it, it feels like an old game: unreadable fights, tedious planet management with a stupid autobuild feature.

I’m a huge fan of 4X video games. 4X stands for eXplore, eXploit, eXpand and eXterminate, and settings range from fantasy (Heroes of Might and Magic series, Warlock: Master of the Arcane [fr]) to semi-historical (Civilization series [fr]) to space (Master of Orion, Sins of a Solar empire, Sword of the Stars [fr], Endless Space [fr]). Starting from a remote corner of an unknown map, you have to set up an outpost and gradually build up your economy and military until your first encounter with other factions. From then, it’s your choice whether to cooperate with or battle against them to secure resources and knowledge in order to reach the multiple game-winning goals.

In his days, Master of Orion II (1996) set a standard of quality for space 4x games. Rich economic simulation, tactical combats, neutral monsters guarding prized planets and an overarching story arc involving outside invaders all were original features at the time.

When a studio buys an old franchise and announce a new game, it always raises eyebrows, and when Wargaming.net bought the Master of Orion franchise in 2013, it certainly raised eyebrows. What would the announced game look like? Would it resemble any of the three games released between 1993 and 2003, or would it be a different game with a Master of Orion livery?

It turns out it’s the latter. Master of Orion: Conquer the Stars (2016) resembles Endless Space more than any of the Master of Orion games. And a game invariably devolves into boring repetitive turn ending gameplay. Let’s go through the stages.

Each planet has a construction queue. At the start of the game, each decision is crucial as there are few queues available and the needs are plenty, even if the choices are limited. At this point, it is interesting to ponder whether to prioritize planet development or outward expansion. 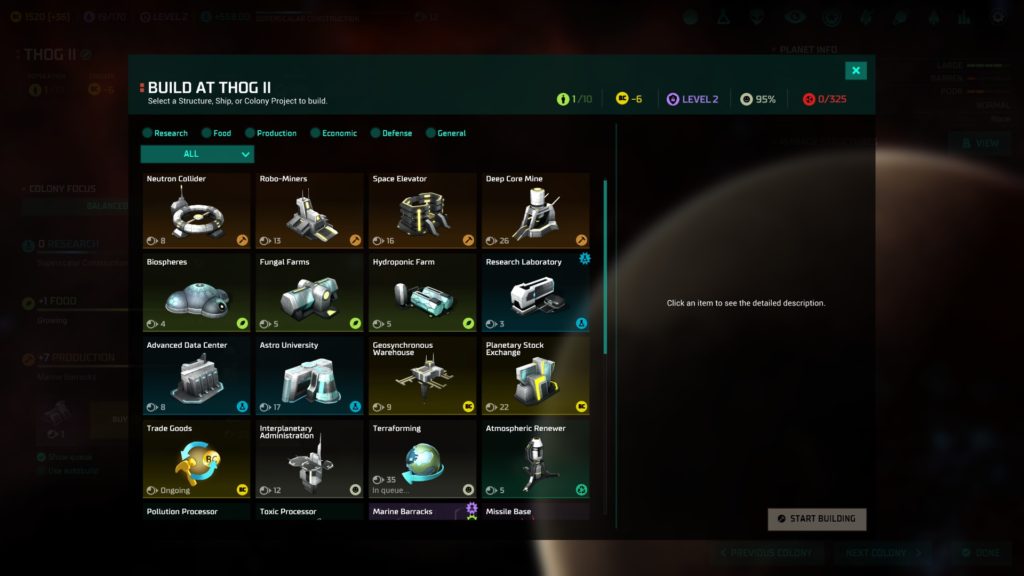 After some research unlocking planet buildings and ships, you can face about 30 choices on a newly colonized planet. Construction choices made one by one stops the auto-turn feature to prompt for the next choice, which means that by about 10 colonized planets, you’re likely to have to choose something every turn anyway. There is a 5 items queue per planet, but it is too short to program all the planned developments. Unfortunately, Master of Orion: Conquer the Stars has an autobuild feature, and, you guessed it, not a good one.

Autobuild is a toggle enabling the game to choose the next construction on a planet once the previous one has finished. It would make for a boredom relieving feature, if only it didn’t try to run your economy into the ground. Each building requires a monetary upkeep, and generally money is sparse. Nevertheless, the Autobuild will happily queue a pollution-reducing building on a pristine planet, a food producing building for a race that eats rocks, a morale-boosting building on an already-ecstatic planet, or a defense building on an inner circle planet.

And, well, if you have to monitor the Autobuild feature, it isn’t doing its job optimally. But this is mere trifle, after all the game is about space battles, right?

Set on a two-dimensional plane in pausable realtime, space battles opposes two lines of ships. It’s possible to give individual moving and firing orders to each ship, although the scale of the mid-game engagements should discourage anyone to do so. The game can “help” you by partially controlling your ships after their manual orders have been completed, or even offer a cinematic mode without any player input. On top of this, you can auto-resolve battles, which should be used with the utmost caution. 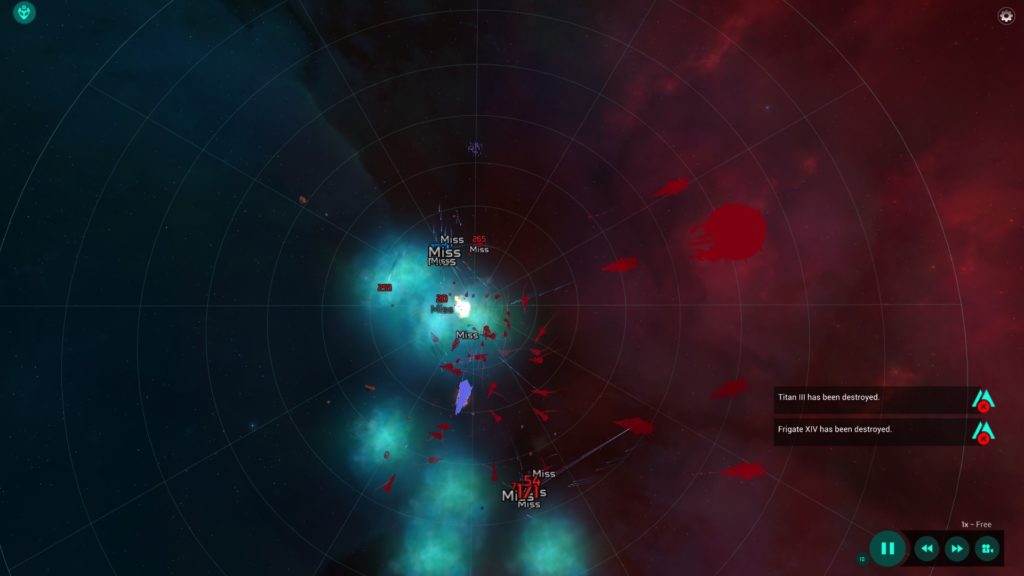 Unfortunately, combat is heavily based on chance to hit for beams and chance to destroy ordnance for missiles. Add to that 10+ seconds cooldowns  for weapon usage, and it gives confusing combats where chanced-based things happen in short burst, and then ships are flying around each other while doing nothing until everybody’s weapons cooldown expires. This makes it hard to know how effective a given ship is against another, and actually encourages mass producing the smallest ship and a couple of bigger flagships to bomb planets.

The ship design feature is pretty varied, with multiple weapons to choose from, modifications to add, fire angle to select, and additional add-ons, but in the end it doesn’t matter since combats are illegible anyway.

I’ve tried to make Master of Orion: Conquer the Stars as interesting as possible given the game settings. I’ve set the Research Pace to Very Slow to avoid discovering new ship tech before the last gen has even been produced, and set the Production Pace to Very Fast, to be able to replenish military forces quickly after a wipe-out, which happens often with such unreadable combats.

It still didn’t fix the micro-management boredom, and the overall game pace has been steadily slowing down as the game progressed. I tried to go for the scenario victory, which includes defeating a massive army you can’t possibly gauge before engaging your forces. Fortunately, in Single Player mode the game allows you to restart at any given turn without needing a manual save.

But at this point, who would like to keep playing this game?